In the middle of the wasteland formerly known as Gainesville, Florida, the AI supercomputer Rhode-S32 miraculously awakens from an EMP-induced slumber. Rhode discovers in a diagnostic scan that she only has 73.88 hours left before her internal components fail and all her data is lost. The companion android who reactivated her, Merope, greets Rhode and explains the situation: Civilization was destroyed by a global nuclear conflict, and the surviving humans have retreated underground into bunkers.

Rhode, unable to abandon her pre-programmed directive to "know all" even in the absence of her creator, insists on uncovering the reason why before her internal components fail. Merope insists that there is no value in learning about the past; if Rhode truly wants to know all, she should observe the new world before her.

7388 is milk+'s surprise project for NaNoRenO 2018. It is a short visual novel with three endings, inspired by 17776 and Analogue: A Hate Story. You decide what Rhode-S32 does with the 3 days of her second life. Will you look back at the past, face the present, or create a new future?

While we have no official webpage prepared yet, you can view the LemmaSoft NaNoRenO 18 thread here.

A supercomputer named after her creator's mother. Her directive is "to know all".

As she was set on Hibernation Mode a year before the end of the world, Rhode is unaware of whatever political conflict occurred to cause the nuclear apocalypse. She is an unsophisticated AI when it comes to personality, and occasionally has difficulty computing independent thought. Regardless, Rhode seems to possess a fondness for her creator.

The 853rd MEROPE Type companion android, a member of the Pleiades Wives android series. Her directive is "to seek companionship (like a stubborn little sister type)".

Merope was activated an hour before the apocalypse and survived the EMP and nuclear blast by hiding in her owner's concrete basement. Since then, Merope has wandered North and South America alone, seeking a companion, unable to shut herself down. Despite her directive and purpose, she's actually quite indifferent towards the fate of humanity.

The company behind the Pleaides Wives under-budgeted their crowdfunding campaign and had to cut corners, hence why Merope has no proper hands, feet, or facial expressions. 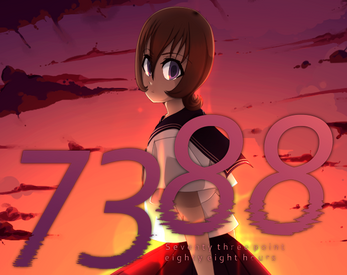